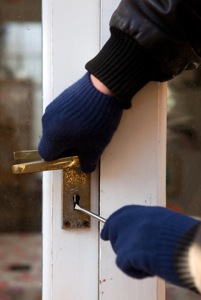 If you have been arrested or are being investigated for burglary in Maryland do not gamble with your future!  It is a serious crime, and in many cases is charged as a felony.  In addition an arrest for may result in your DNA being collected and kept by law enforcement forever.  The Herbst Firm knows the ins and outs of this crime, and will fight at all costs to keep you out of jail, and off probation.

Under state law, burglary is broken down into four different degrees ranging from misdemeanor fourth degree to felony first degree. The crime is traditionally defined as breaking and entering a building, structure, or conveyance with the intent to commit a crime therein. As is the case with most traditional legal terms, the definition of the crime has evolved. One part of the traditional language in the state law that has remained intact is the requirement that there be a breaking and entering. The term entering is self explanatory but the term breaking is not as obvious. A defendant accused of burglary does not actually have to break anything including a window, door, or lock. Breaking simply means crossing an imaginary line where the building, structure, or conveyance begins. In reality breaking is almost synonymous with entering but implies a lack of permission to enter, and the two terms are still written in the law together. The traditional term dwelling is still used but it basically means any structure that is used as a home.

Other specific types of burglary that are not classified by specific degrees include breaking and entering of a motor vehicle and burglary by destructive device. The breaking and entering of a motor vehicle law makes it a misdemeanor punishable by 3 years imprisonment to commit a theft of an actual motor vehicle, or to steal anything located inside a car.  Destructive device crimes can be charged if a defendant uses an explosive to open or attempt to open a safe or a vault. This crime has a maximum sentence of 20 years in prison and can be charged separately with another count of first, second, or third degree burglary. The sentences of these two crimes do not have to run concurrently. In other words a defendant who breaks and enters into a persons home and then uses a destructive device to open a safe within the home can face up to 40 years in prison on two separate felonies. If you or someone you know is being investigated or has been charged with any crime, call the Baltimore criminal lawyers at The Herbst Firm for a free consultation.  We are willing to travel to meet you anywhere in the state to discuss your case.