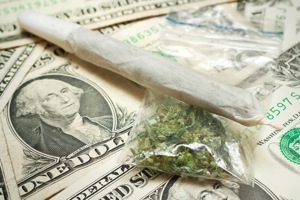 Despite the recent passage of marijuana decriminalization,  police officers still make thousands of arrests for the illegal drug each year. In 2007 alone, Maryland police arrested 25,000 for marijuana related offenses. Most of these arrests were for simple possession. As of  October 2014 small amounts of pot were decriminalized in Maryland, and as of January 1, 2023 any amount less than 1.5 ounces is no longer a crime. Punishments for person convicted of possession will vary in different jurisdictions throughout the state. The current maximum penalty for simple possession of is 6 months in jail for over 2.5 ounces, and while it is uncommon for a defendant to be sentenced to significant jail time for possession, jail sentences are still handed out from time to time.  If you have been arrested or cited contact Benjamin Herbst anytime for a free consultation.  Benjamin has successfully handled hundreds of marijuana cases, and more than prepared to fight for you or a loved one.

After years of fighting, marijuana will finally be legalized for recreational use on July 1, 2023.  The wait for recreational dispensaries to open their doors is still months from becoming a reality, but as of now there be far fewer marijuana possession cases showing up in state court.  The legal jurisdictions in around the state, and their respective judges each treat possession of marijuana differently. In Baltimore City, a defendant may find his or her case ending in dismissal while the same case in Baltimore, Montgomery, Worcester, or Anne Arundel Counties could be treated much differently. An experienced lawyer knows the how the different jurisdictions in the state treat this charge, and will diligently prepare the best possible defense.

A large percentage of marijuana possession arrests occur as a result of traffic stops. Many of these traffic stops and the subsequent car searches are in fact illegal, and there are ways that a skilled lawyer can file motions to have the traffic stop thrown out. Police officers are trained in drug detection, but they may also be schooled in knowing the right things to say to validate a traffic stop. Police officers have been known to justify a search and seizure of a car based on smelling the odor of marijuana, regardless of whether the odor of marijuana existed. An experienced criminal defense lawyer can vigorously question the arresting police officer on this issue and seek to have your case dismissed.

There are so many ways that a drug charge can affect a defendant other than serving actual jail time. A judge or state’s attorney may offer to resolve your marijuana case the first time you are actually in court or even at your bond hearing. Do not plead guilty or agree to any sort of plea negotiation without contacting a lawyer!  Collateral consequences of accepting a plea deal to a criminal charge could include loss of driving privileges, loss of student loan privileges, immigration consequences, and having a permanent criminal record.  A marijuana lawyer with experience defending hundreds of these cases can prevent this from happening.  There is simply no need to gamble with your future and go at it alone.

The judge will allow you time to hire a lawyer to defend your case, so there is no need to rush into a plea agreement. If you or someone you know has been charged with possession drugs contact a marijuana possession lawyer at 410-207-2598 at any time for a free consultation.  The Herbst Firm will also be able to explain the modifications of the marijuana laws that are happening just about every year.  These new laws may affect the way your case is handled by the State's Attorney and it is important to become familiar with the new laws for future reference.